Sometime, during AD 150-152 in the North Eastern corner of the Roman province of Britannia, a citizen was compelled to bury his hoard of 522 silver denari, equivalent in value to around £12,500 in modern day currency. A substantial amount given that a Roman soldier would have been paid around 300 denari per year.

What compelled him to bury the hoard we can only imagine; was it for safe keeping while he headed to market in nearby Ancaster (Causennis), just a short trip up Ermine street or had he been asked to head north and help with the trouble caused by the Caledonians near Hadrian’s Wall? Perhaps they were stolen by a mischievous slave who was then caught, sold and could never return to recover his loot. Who knows but, for certain, these coins were not recovered, at least not in Roman times.

The hoard was found by a Metal Detectorist who was carefully searching a large field in Lincolnshire, after gaining permission from the landowners where some 1,870 years previously these coins had been buried.

The field had been cultivated so the going was heavy but soon he received a signal which was to make it all worthwhile. Digging down the unmistakable sight of a coin, then another and another. On close inspection they were Roman silver denarii and what’s more, the outline of a pot could be seen! Although disturbed by agriculture the pot was reasonably intact and contained a sizeable deposit of coins. Imagine what must have been running through the finder’s mind! The coins were reported in accordance with the Treasure Act and were soon in the safe possession of the British Museum.

Here they were studied and subsequently declared as ‘Treasure’ by a Coroner. This gives The British Museum, or any other museum in the country, the opportunity to acquire the hoard and should they wish to do this the finder and landowner would have been paid a fair market value. However, on this occasion, there was no interest shown so the hoard was disclaimed and returned to the finder who decided that it would be best to sell the coins so that he could split the proceeds evenly between himself and the landowner. This hoard is large when compared to similar finds of this date, silver coin hoards from this period usually contain up to 100 coins.

Here we see the reconstructed vessel and some of the coins. The green circles visible on the inside of the vessel are corrosion imprints from the coins showing that when all 522 denari were placed inside it was literally filled to the brim. Perhaps the owner filled this pot then moved on to another nearby which is as yet undiscovered!

Whilst broken by agriculture you can see that the majority of the grey ware vessel which contained the hoard is present. With some restoration we can get a good idea of what this would have looked like before being buried. It is a fine example of an Alice Holt ware vessel originating from the New Forest region, in Southern England, dating to the first half of the 2nd Century AD. Note the fine cross hatched decoration to the shoulder.

BACKGROUND TO THE AREA

Lincolnshire was occupied by the Corieltauvi tribe during the Iron Age. During the 1st century AD the Roman way of life was adopted by the native Britons and fortified towns and infrastructure including impressive roads were introduced. The map below shows the main roads and you will see that Ermine Street runs close to this find site. 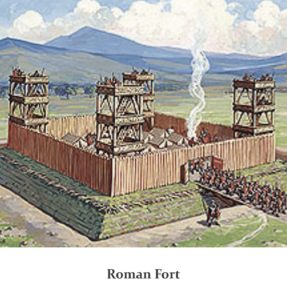 Just north of the find spot is the Roman town of Ancaster (Causennis), this was a small town by Roman standards but still had a forum, town defences and Roman military presence. The Romans built a fort over an Iron Age settlement sometime in the 1st century AD. It lay on Ermine Street, a major Roman road heading north from Londinium (London) and, after the army left, expanded rapidly in the early 2nd century into a small town. Not much is known about life in the town, but industry included pottery production and interestingly, coin forgery. There may have been a sculptor’s workshop as some fine carvings have been discovered. 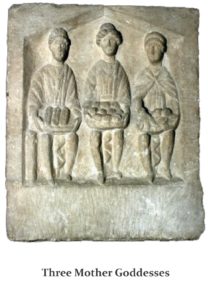 This includes a Deae Matres (The Three Mother Goddesses) sculpture and altar from a religious precinct. Excavations have also found a cemetery containing more than 250 Roman burials, including 11 stone sarcophagi suggesting that people of some wealth lived nearby. A dig by archaeological television programme Time Team in 2001 revealed a cist burial partly constructed with a re-used inscription to the god Viridios. The dig also uncovered Iron Age to 3rd-century pottery, a 1st-century brooch and some of the Roman town wall.

Once at the British Museum, the coins were conserved in order that they could be counted and identified. There were 522 silver denari stretching from coins of Mark Antony (32-31 BC) to Faustina II (AD 152), some 184 years of Roman history. All bar the early Legionary issues were struck in Rome.

As usual with finds like this the older coins were in the poorest condition, as can be seen to the right, understandable given that they had been in circulation for 184 years. The latest dated coins in the hoard were much as struck having seen very little wear through circulation.

184 years of history represented in one hoard is pretty remarkable – this would have been five generations (the average Roman life expectancy was 37 years). This is comparable to having coins in circulation today from AD 1834 showing the bust of King William IV!

This gives an insight into the times and perhaps shows a lack of importance of what was actually on the coins but more significance in the material value.

The earliest coins in the hoard are struck during the reign of Mark Antony and are Legionary issues. These were struck at travelling mints and each coin bears the number of its legion. To the right, is a nice example of a coin struck by the mint travelling with the V (fifth) Legion.

We then see a mix of coins from the 1st Century AD including famous names like Nero and Galba, the latter being known as one of the less successful Roman Emperor’s reigning for just seven months in AD 68-69.

The 2nd Century AD sees a greater emphasis on dynasties. Coins are struck showing emperors wives; then in the late 2nd and 3rd Centuries, daughters, sisters and mothers are also featured portraying the Emperor’s as family men – something which must have been increasingly popular with the Roman citizens.

Many of the coins in the hoard are struck during the reign of Emperor Hadrian (AD 117-138). This time was mostly peaceful as Hadrian worked hard to maintain his adopted empire rather than expand it. Trouble from the Picts in unconquered Caledonia (Scotland) led to the building of Hadrian’s Wall to protect the northern frontier of Britannia around AD 122.

There are a huge variety of reverse types for silver denari, most show gods and goddesses but some celebrate triumphs of engineering, architecture and military campaigns. Some show wild animals which have been ‘discovered’ by the Emporer’s troops in faraway lands which most citizens will probably have never set eyes upon – what a great place for propaganda!

When these coins were removed from the ground, there were extensive green corrosion products meaning they were not legible.

Initial cleaning to aid identification was carried out at the British Museum during which fragments of charcoal were recovered and identified as being from a willow tree by the department of scientific research. How this burned wood came to be buried with these coins is a mystery, perhaps the coins were being counted by their owner close to a spitting fire before their final concealment or perhaps even a charcoal pencil was used to keep a tally of exactly how many coins were being hidden!

While the coins were now identifiable they still required further conservation to remove the corrosion products. Luckily, at Silbury Coins, we know specialist conservators who knew exactly what to do with them. Careful work to remove the encrustation, but not damage the coins themselves, took place over a number of months and the results are clear to see.

A BIG thank you to the finder for his hours of searching to locate this buried treasure and for his careful excavation. Thank you also to the landowner for allowing him to search the land which led to this hoard being discovered and to everyone else involved in getting this exciting find to this point.

It has been a pleasure to be involved with another amazing Treasure find, from the beginning to the end of the process it is always enjoyable and something we are very passionate about. Now it’s our turn to pass this enjoyment on to you, the collector, and give you an opportunity to own the coins from a real Roman Treasure find.