The Middle Anglo-Saxon period in British history is a complex tapestry of kings, kingdoms, vassals and the concept of regional identity – mostly set against the looming backdrop of raids and invasion from Scandinavia. Starting with Offa of Mercia’s reign in c. AD 757, this period lasts for almost two whole centuries – ending around the reign of Æthelstan, who is considered the first true ‘King of the English’ by most historians. To study this era is to become intimately familiar with famous figures such as Bede, Alfred and Guthrum – just to name a few.

Traditionally, historians have drawn attention to the so-called ‘heptarchy’ – the presence of around seven kingdoms in Britain; Wessex, Mercia, Northumbria, East Anglia, Kent, Essex and Sussex. Of these, rulers of the first five issued coins in their own right – each flourishing and subsequently declining in turn due to a variety of factors, both internal and external. However, these divisions over-simplify the socio-political situation. This is made evident by literary references to lesser ‘kingdoms’ such as Hwicce (centred around Cirencester, absorbed by Mercia in the 7th century), Lindsey (annexed by Northumbria) and the Wihtwara of the Isle of Wight – which appears to have largely retained its independence until the early 8th century.

To the right you will see an interactive map of Middle Saxon England, click on a kingdom (or the ‘Read more’ links below) for more background information and specifics about their kings. 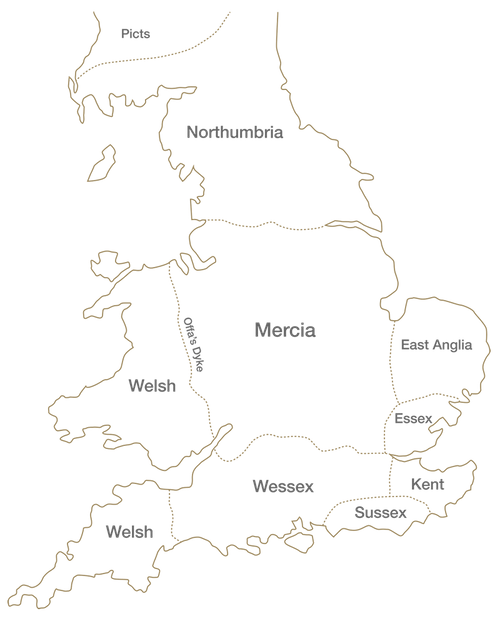 Like Mercia, the Kingdom of Wessex (or, the West Saxons) has left an historic legacy which survives to this day – similarly preserved in some administrative areas and institutions.

Ask a number of people in the UK to name one of the seven Anglo-Saxon kingdoms, and Mercia would perhaps be the most frequently mentioned

Northumbria was formed in the late 7th century from the bloody merger of two separate, ancestral kingdoms – Deira and Bernicia.

Much like Kent, by c. 750 East Anglia was already an old kingdom. However, it was somewhat in a state of decline.

Whereas Mercia and Wessex were just getting into their stride during the Middle Saxon period, Kent is notable in that its predominance (and indeed, independence) was coming to an end.

Kings of all England

Under the rule of Alfred, a status quo had been achieved. Following his successes at the Battle of Edington in 878 and treaty with Guthrum in 880, breathing space had been achieved against the marauding Scandinavians.